On Thursdays, a tiny new land appears in Century City for a few hours and then disappears. Every week, the Porchetta Republic pulls the same vanishing act in Downtown LA,  in Pershing Square on Wednesdays and in Smorgasburg LA on Sundays, bringing porchetta sandwiches to the hungry masses and then it’s gone. 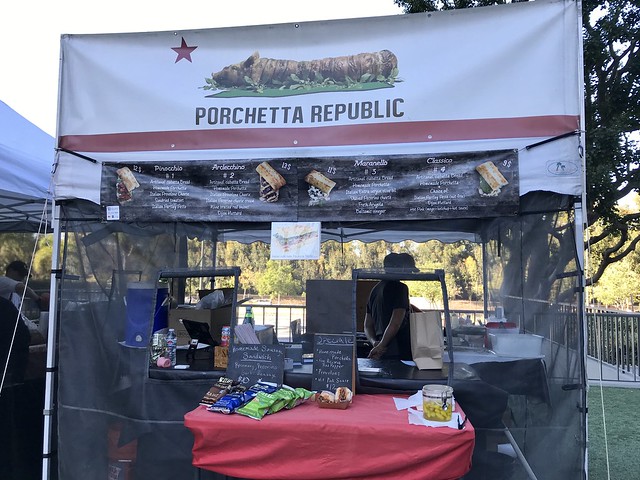 For those unfamiliar with the joys of this Italian street food, porchetta is a pork roast seasoned with herbs and spices and roasted in its own fat. Porchetta Republic sources their meat from Harvey’s Guss Meats and slow roasts it for five hours. The meat is then thinly sliced to order on site. 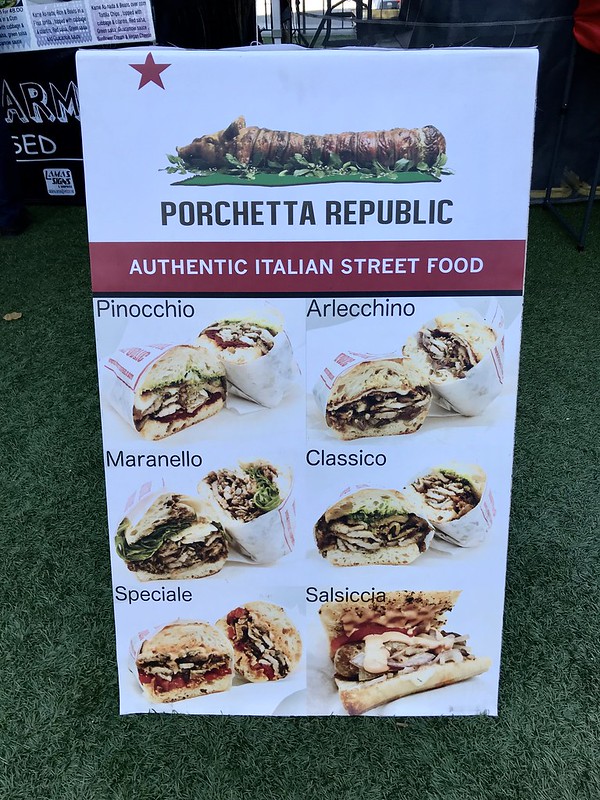 There are several porchetta sandwiches on offer, along with a couple of specials. You can also build-you-own if you so desire. All sandwiches are made on Boulart bread, providing a nice solid foundation for the pork. 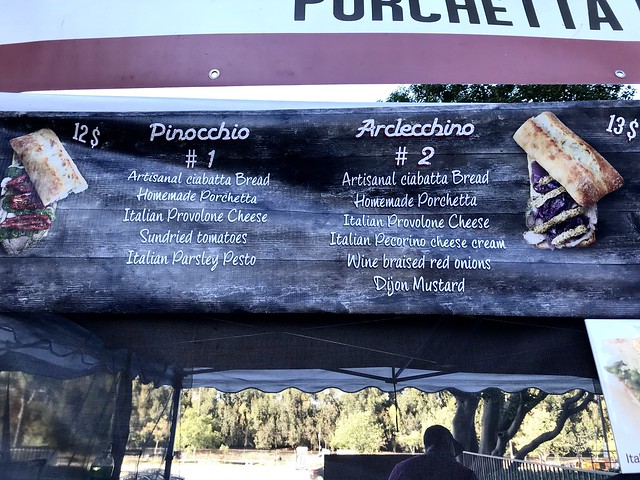 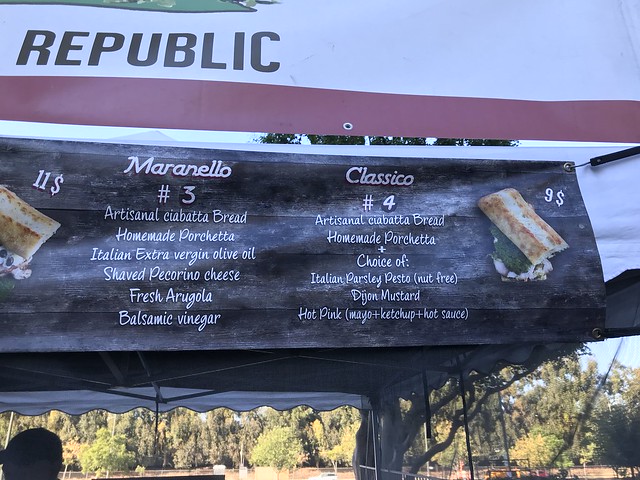 Upon first opening the box, the sandwich looked deceptively small. 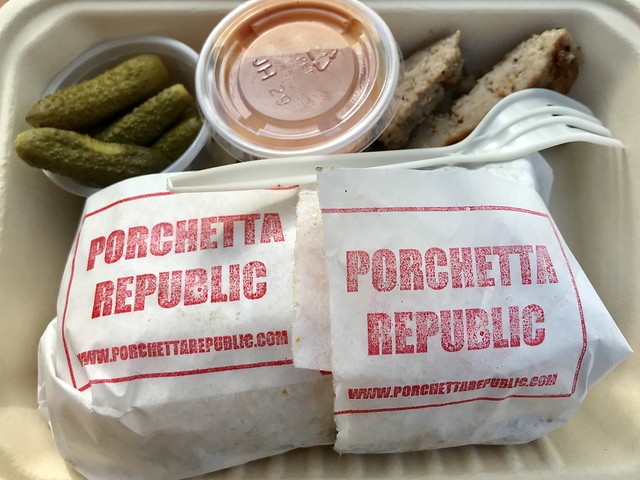 However, on further exploration, the sandwich was chock full of meat, a generous portion considering it only cost $9. 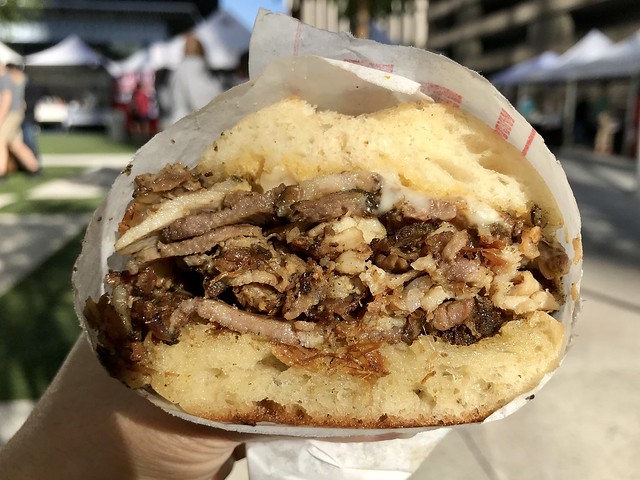 I had selected #4, the most basic sandwich with just meat, sauce and bread. The dijon mustard I chose got a little lost with the strong flavor of the seasoned porchetta (the parsley pesto probably would have provided a better complement). The meat was only the teeniest bit fatty, just enough to give it that richness that you’d expect. 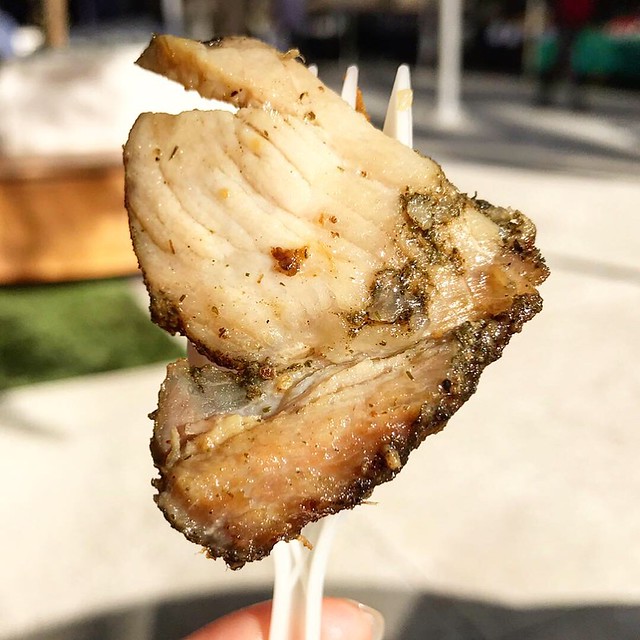 A sample of their housemade sausage was included, along with their hot pink sauce which I was scared to try. The sausage was delicious – I dare say I enjoyed it even more than the porchetta. That sauce that I was hesitant to try turned out to be quite mild, a mixture of mayo, ketchup and chili sauce. 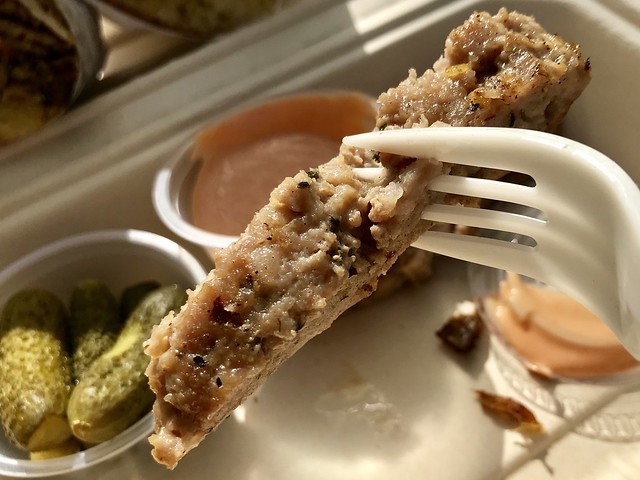 For a porchetta sandwich that’s a good bang for your buck, pay a visit to the Porchetta Republic and bask in the glory of munching on Italian street food in the LA sunshine.