I was a little leery about going to any restaurant in the Cafe Gratitude chain. From what I had heard, it sounded a bit too spiritual – from getting asked the question of the day to the silly names of the menu items. I am not a vegan, nor will I ever be one, but thanks to a Blackboard Eats deal (30% off), I was willing to give Gratitude a chance.

It was a super warm night, though quite comfortable outside on the patio area. I was bracing myself for the question of the day, but our server did not ask it, perhaps sensing my cynicism. 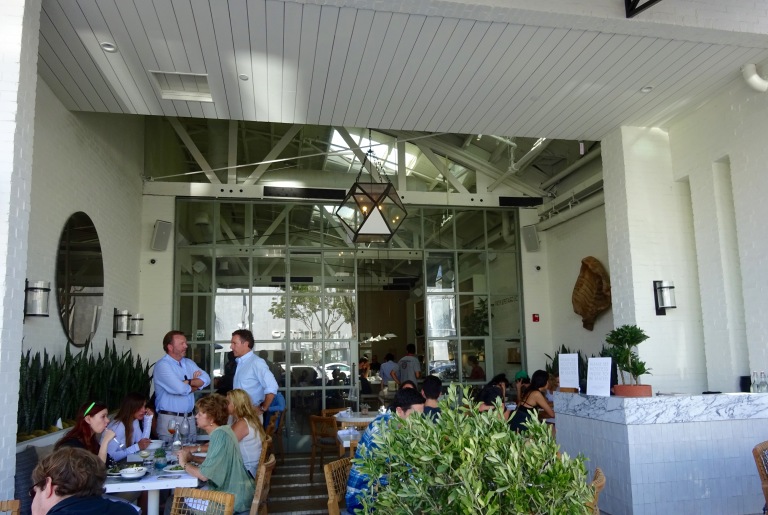 The menu items all use adjectives as the name of the dish. After ordering, the server will read your order back to you as such:

I had been considering the Indian bowl, but it was named Humble. I’d much rather be told that I was awesome than humble.

Awesome was an Eggplant Parmesan Panini, which seemed a pretty safe bet in my book, less risky than Liberated’s raw pesto kelp noodles. Other than the cashew ricotta and brazil nut parmesan, it seemed pretty straight-forward. The panini also had marinara sauce, wild arugula on “slow-fermented” ciabatta (thank goodness they still had gluten on the menu) and a mixed green salad with fig balsamic vinaigrette.

My husband was Elated, the Mole Abuelita Enchiladas. He’s pesco-vegetarian and is decidedly more excited about eating vegan. He really enjoyed his enchiladas which were filled with blackened tempeh, black beans and sweet corn, topped with a roasted tomatillo sauce and queso fresco.

The worst part was when the man sitting next to us launched into a profanity-laced attack on the server for accidentally being charged an extra item. It’s a bit sad that a place that tries to foster a higher spirituality would have a customer that thinks it’s acceptable to verbally abuse another human being like that. Maybe the hippy dippy ethos didn’t suit him. Or maybe he just needed a steak.

The best part of the meal? Seeing Jodie Foster with her wife and one of her sons at the table next to us. Being in Beverly Hills where celebrities are a dime a dozen, not a single person asked her for a selfie.

As cynical as I am about Gratitude’s touchy feely attitude, I have to admit that after finishing my meal (where I pretty much cleaned my plate except for the odd sprout or two), I didn’t feel that heavy bloated feeling that I would have after eating an eggplant parmesan sandwich. At those prices, I won’t be rushing back to Gratitude, but I would be more than happy to recommend it to any vegans I know. They’ll love it.

As of February 2020, Gratitude has closed.