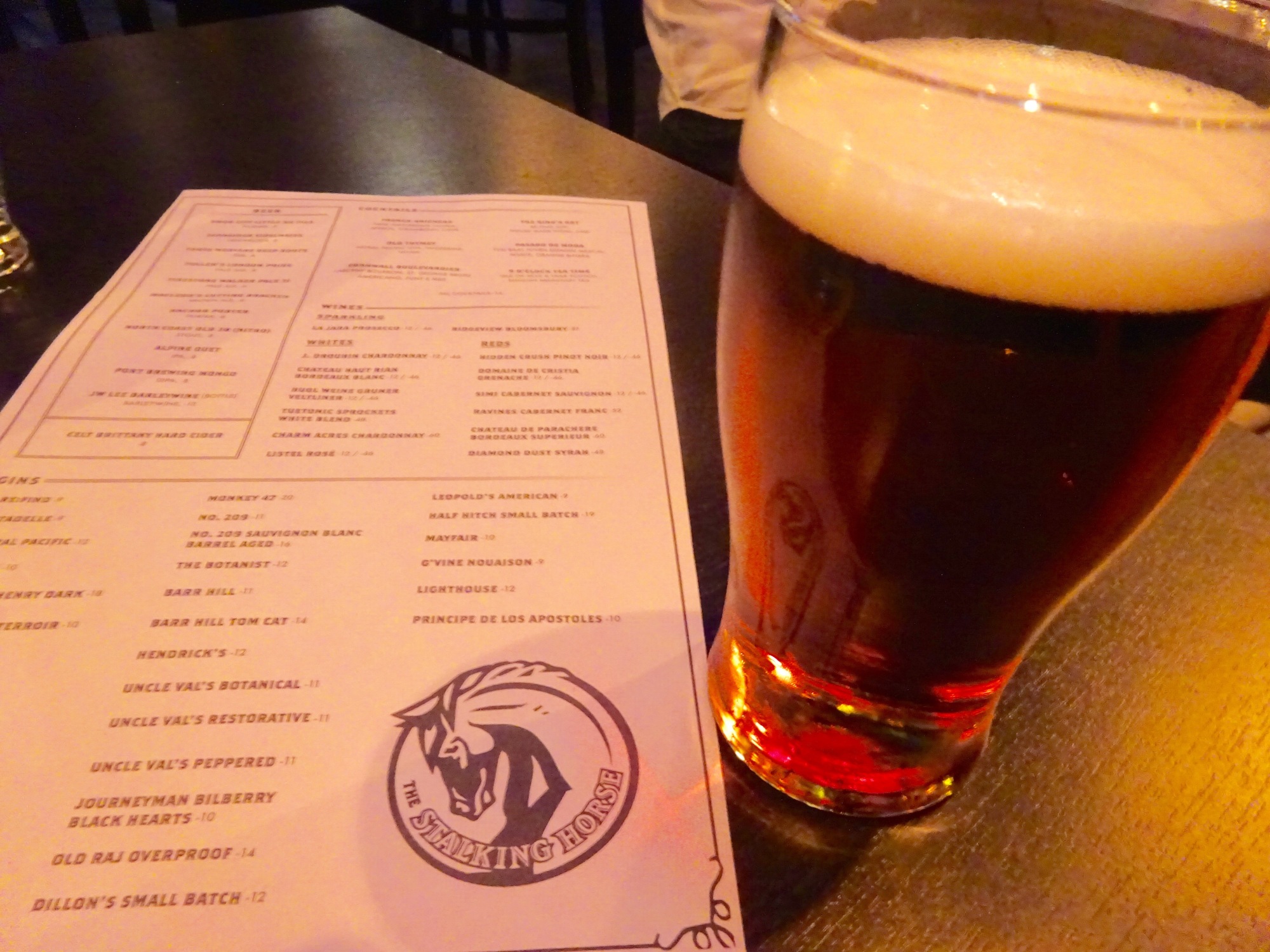 A bit of England has landed in Rancho Park in the form of The Stalking Horse Pub. In the spot previously occupied by Steingarten (and Kay N’ Dave’s before that), the space has been given a full remodel. As a result, The Stalking Horse certainly looks every part the British pub.

Although their equipment has been set up, The Stalking Horse has not yet started brewing their own beer. In the meantime, they offer about 10 beers on tap, with American craft and British beers. You can sample any of them, as your sever will happily offer. They also have an extensive gin selection, should that be more your thing. 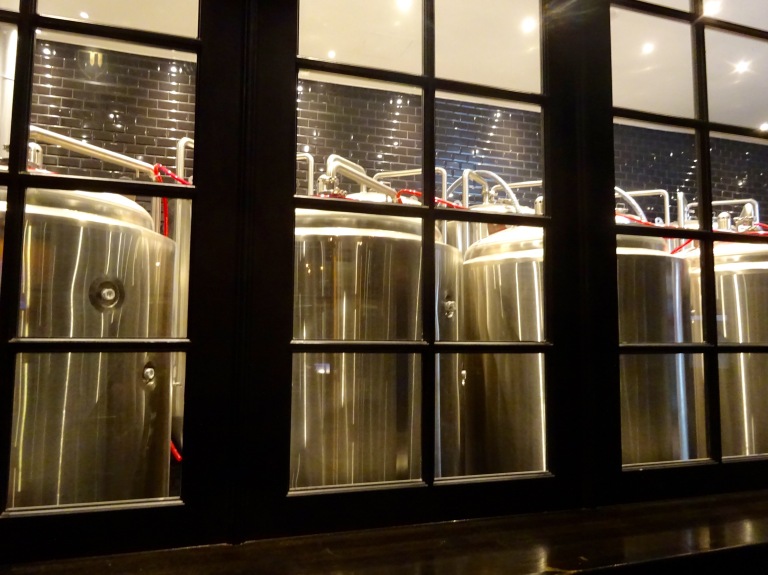 At first glance, the menu seems pretty standard with Cornish fare like pasties and pot pies, along with the traditional fish and chips and burgers (grass-fed). Upon taking a closer look, you’ll see that several dishes like the fish and chips and the pasties have a “v/nv” notation. Whoa. Vegan fish and chips?

Turns out, many of the pies offer a vegan option by using Gardein products, in the place of chicken or lamb. The cottage pie is only available as a vegan dish, replacing the meat with a “plant-based steak,” which turned out to be the Impossible Burger. The fish and chips, in case you’re curious, relies on a soy product for the faux fish.

As we’re not vegan, we chose the classic fish and chips, priced at a steep $19, with two hefty pieces of wild Alaskan cod and a handful of thickly cut chips, served with tartar sauce, ketchup and aioli.

The breading on the fish was nice and light, not greasy, allowing one to fully enjoy the generous portion of cod. The chips were perfectly done, eager to be doused with malt vinegar and a smear of aioli.

For once, we even had dessert – a peach cobbler baked in a cast iron pan. Instead of a biscuit topping, small pieces of puff pastry decorated the peaches, crowned by a scoop of Van Leeuwen vanilla ice cream (which, I have to say, is pretty incredible stuff). 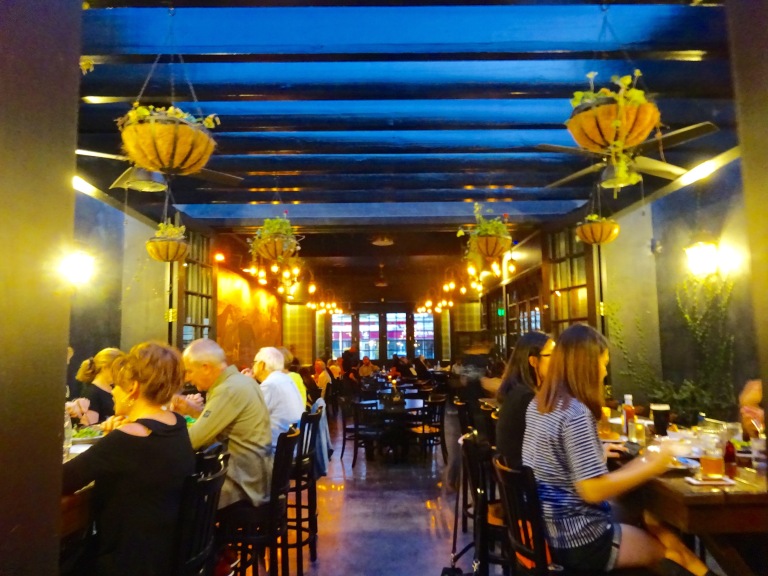 Service was great, and we felt well looked after, even being given additional beers samples after our meal. The Stalking Horse opens daily at 5pm, but will expand its hours, opening at 11:30am, starting on September 19. I look forward to returning once they’ve started making their own beer for a quick trip back to England. 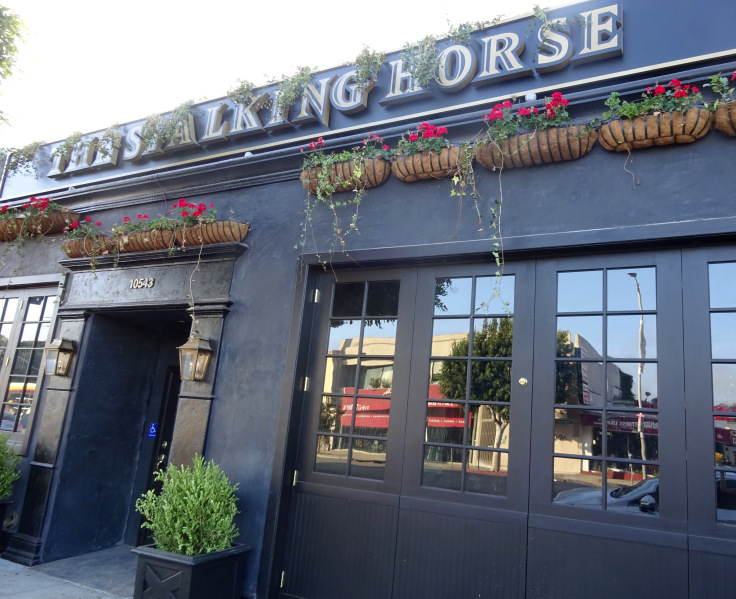 Love Sundays @lamonicasnypizza @westwoodvillage where you can get an 18” cheese pizza for only $11! They have the same deal after 9pm during the rest of the week. Extra charge for toppings, of course. Their dough is made in NY and it’s even sold @surlatable! Lamonica’s is open for takeout and delivery, having recently expanding their delivery zone to feed more hungry mouths! . . . . . #pizza #westwood #cheapeats #food #foodporn #lafood #lafoodie #foodie #laeats #foodstagram #instafood #eaterla #dinela #infatuationla #yelpla
Can’t go to Hawaii for Spring Break, but at least I can still get my plate lunch fix @ruttscafe in Culver City/Mar Vista. Rutt’s even has $5 grab-and-go BBQ chicken bowls and Hawaiian Royales and is open for takeout/delivery. Order takeout online and use the promo code “express” for 15% off. Make sure to ask for a side of teriyaki sauce with your order! Swipe to see pics of what the kalua pork plate and smoked salmon royale looked like when one could dine in. . . . . . #hawaiian #platelunch #food #foodpics #foodstagram #instafood #foodie #lafoodie #lafood #laeats #eaterla #yelpla #infatuationla #dinela
The MC Sandwich @eatmainchick @colony_cooks in West LA. You can order your chicken naked, mild, medium or spicy. Only $5.50 and available for either pick up or delivery! . . . . . #friedchicken #sandwich #foodstagram #instafood #food #foodporn #foodie #lafoodie #laeats #lafood #eaterla #dinela #yelpla #infatuationla
Vegan Crunch Wrap @californiachickencafe - avocado, veggie rice, tomato, greens, crispy noodles and veganaise in a pita wrap. Love the crunch from the noodles in every bite! California Chicken Cafe is open for takeout and delivery. Their chicken is always delicious and so are their sides! They’re also famed for their Chinese Chicken Salad, which also has those crunchy noodles and Chinese dressing. . . . . . #californiachickencafe #meatlessmonday #vegan #vegetarian #food #foodpics #foodie #lafood #lafoodie #laeats #foodstagram #instafood #eaterla #yelpla #infatuationla #dinela
Unable to make our monthly SGV trip, got our Chinese food fix @tastynoodlehouse on Sawtelle with spicy fish and tofu and noodles with fish and preserved veggies. They’re open for takeout and delivery through DoorDash. I thought it was a pain in the you-know-what to remove everything from the takeout containers, but it sure looks better for pics! . . . . . #tastynoodlehouse #noodles #sawtelle #food #foodpics #foodstagram #instafood #foodie #lafoodie #lafood #laeats #yelpla #dinela #eaterla #infatuationla
Just saw that @lodgebreadco baked 50 loaves of challah for Shabbat, only available for pickup at their Culver City store. Their challah has a slightly salty crust which blends nicely with the sweet interior. (This pic taken months ago...the good ol’ days.) Lodge is also taking online bread and pastry orders 48 hours in advance, in addition to having items available to go. If you’re motivated and looking for a project, you can even buy flour and eggs there and make your own challah at home! . . . . . #lodgebread #challah #culvercity #food #foodpics #foodblogger #foodstagram #instafood #foodie #lafoodie #laeats #lafood #yelpla #dinela #infatuationla #eaterla