Only one Chinese restaurant in Los Angeles managed to earn a Michelin star – Bistro Na’s. This Temple City restaurant specializes in cuisine of the Imperial Court, with impressively plated dishes served in a elegant setting. 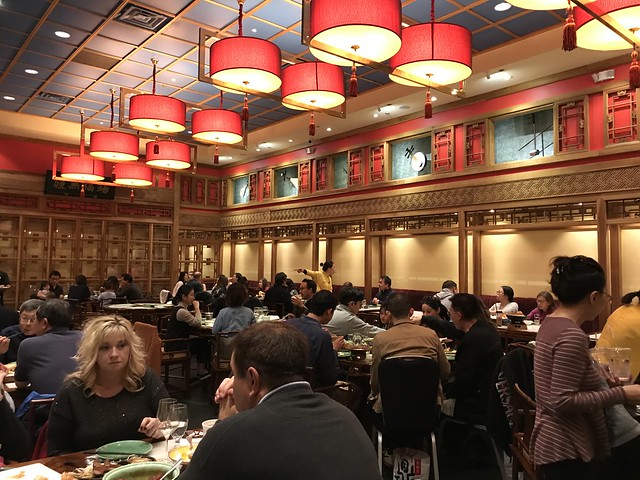 Their inch-thick menu looks rather intimidating, but each page is quite hefty, with only two or three dishes to a page, each stunningly photographed. Luckily we had a big group and were able to order several dishes. 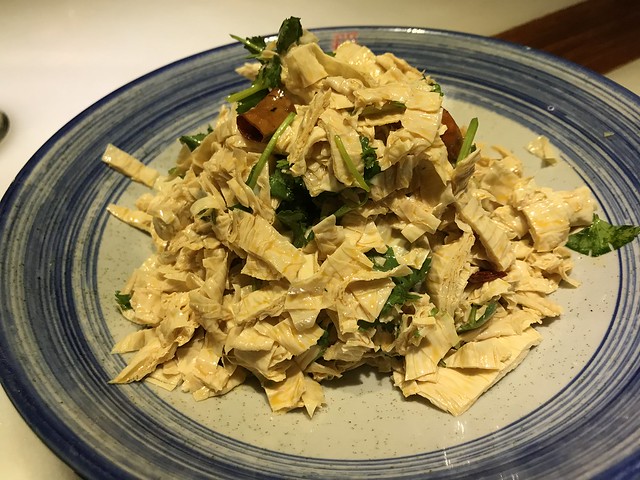 The Chili Tofu Skin Salad was lightly dressed, with the slightest bit of heat from the chili. 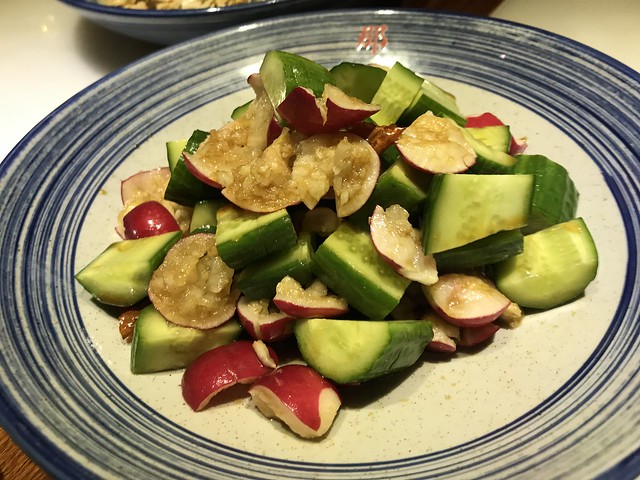 Our other appetizer was the Cucumber and Radish Salad, refreshing though not the most exciting choice. It did pair nicely with the tofu skin as a starter. 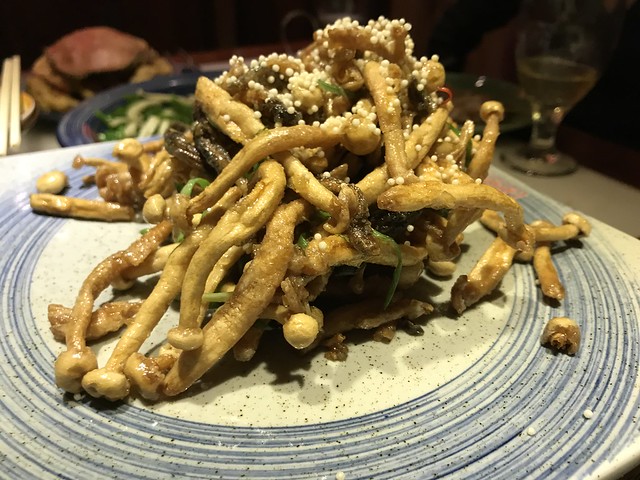 One of my favorite dishes was the Fried Mixed Mushrooms with Rice Cracker Bites. The mushrooms were crispy, salty and sweet. My husband likened it to eating a savory version of kettle corn. 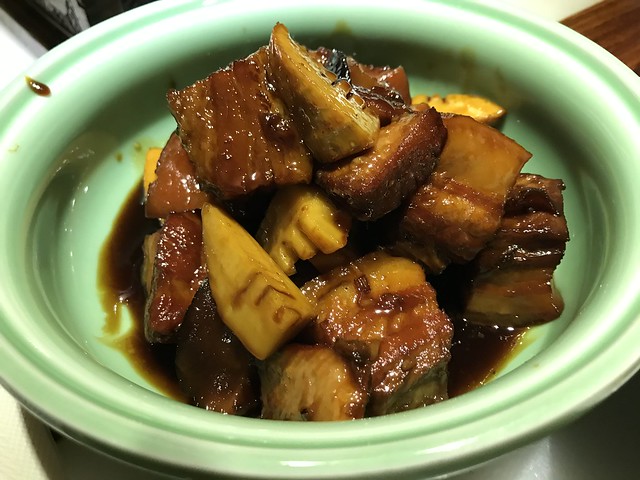 Another standout dish was Na’s Braised Pork Belly. The cubes of pork were layered with gelatinous fat, making it quite a decadent treat. 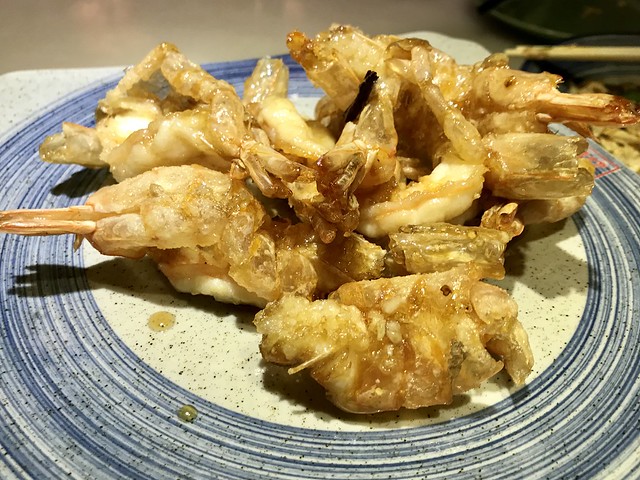 Their signature Crispy Shrimp lived up to its hype. The shell had been mostly separated from the meat before being fried, creating a shatteringly crispy edible shell, which contrasted with the plump shrimp. This dish was well-worth our 1.25 hour drive in traffic. 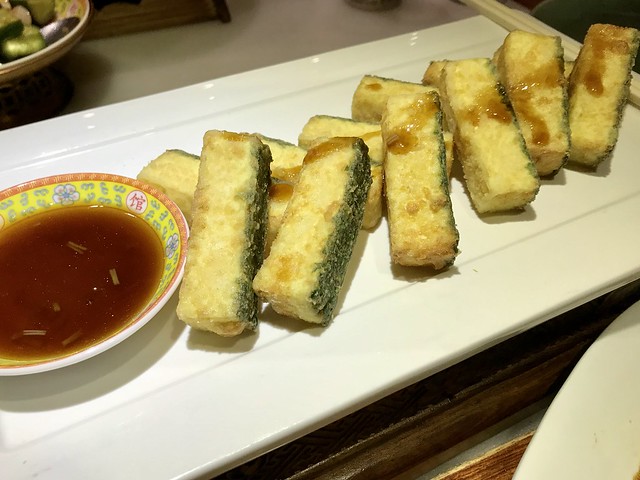 Slices of deep fried tofu on bok choy leaves composed Na’s Secret Tofu, served with a dipping sauce. Sitting on top of a wooden box, it looked quite dramatic, though I can’t say it was particularly special. 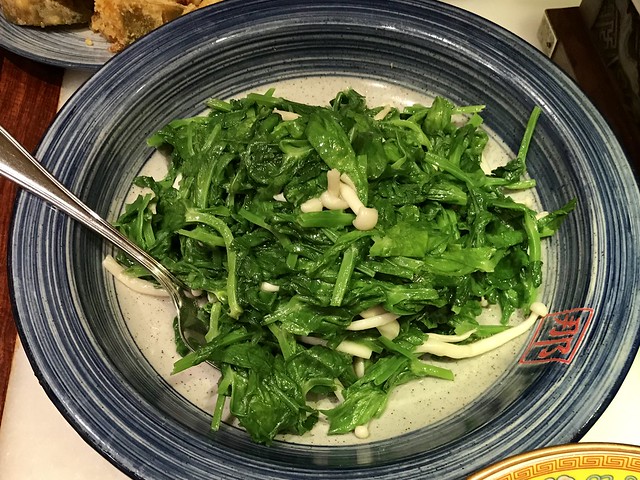 With a protein-heavy meal, we tried to balance it out with the Stir Fried Pea Sprouts with Mushrooms. The vegetables were very simple and not oily, letting their green goodness shine. 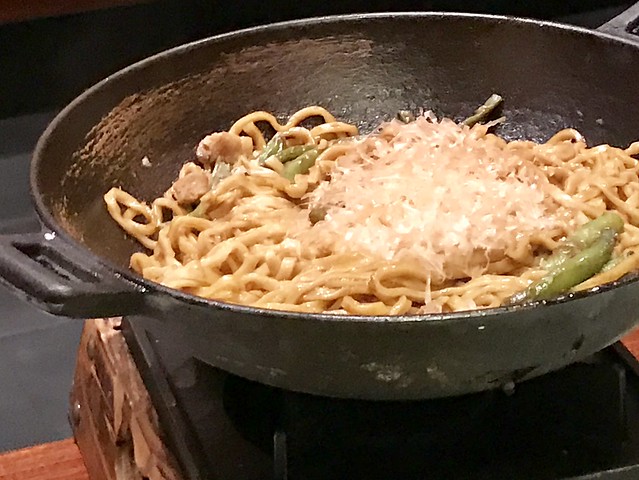 For the unadventurous kids in our group, we got an order of Old Beijing Noodles, handmade noodles with thin slices of pork belly and green beans. The noodles were a bit overcooked, as were the limp and lifeless green beans. They were a hit with my fussy daughter, who helped herself to seconds and thirds. 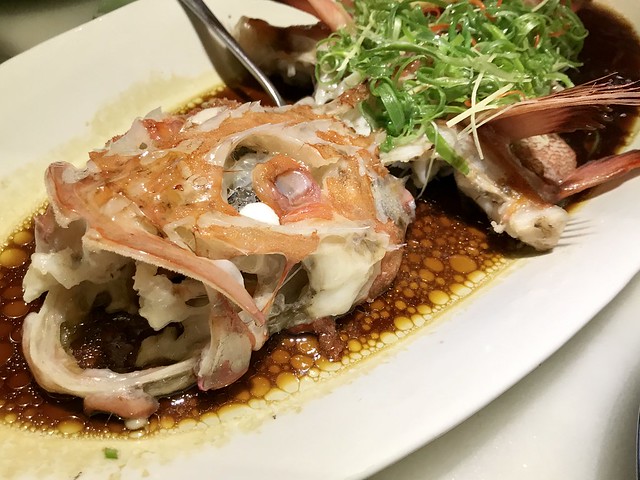 The steamed fish looked as it it had been cut prior to cooking, so that the body was not intact. Although the head was huge, the body seemed to be much smaller, yielding a tiny serving of fish. What we could manage to eat was good (making me wish the fish had been bigger). 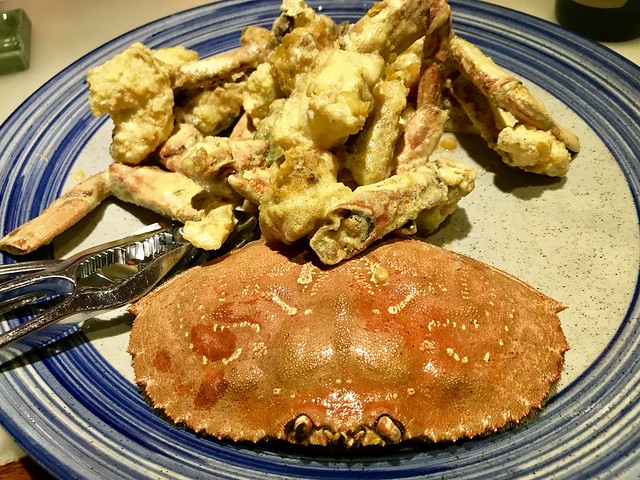 Probably the most disappointing dish was the Baked Golden Dungeness Crab with Pumpkin. I had wanted to order lobster, but the smallest they had was 4-5 lbs so I settled for crab. Maybe it was just a fluke, but the crab was very dry, making me wistful for the more traditional (and tasty) ginger and scallion version. 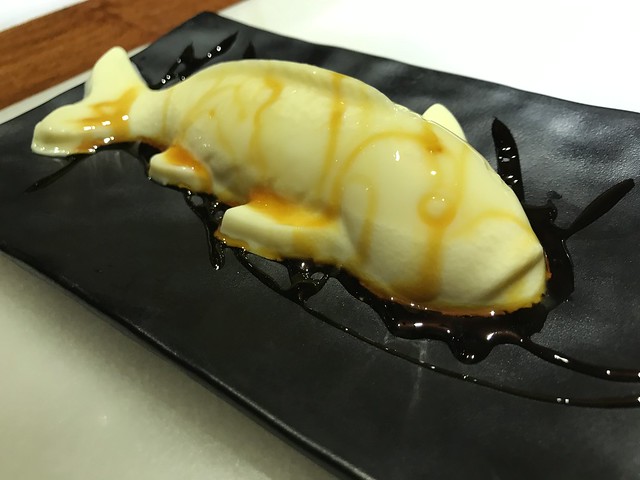 Somehow the waiter managed to talk my mom into ordering the Milky Cheese for dessert. It was fish-shaped, drizzled in a light sauce. It was like a panna cotta, less cheesy than milky. I’m not a big fan of Chinese desserts in general, and this one did nothing to change that outlook.

On a Saturday night, Bistro Na’s is buzzing, with waits of over two hours. Crowds wait out front, smoking (I had no idea smoking was still popular until I came here), and Ferraris revving in the parking lot (I thought I somehow stepped back in time to the ’80’s). Even though it might be early, dinner reservations at 5pm will ensure that you won’t have to wait for a table when your reservation time arrives (thus saving you from subjecting your lungs to the clouds of cigarette fumes coming in from out front).

Free parking in the shopping center lot, with additional underground parking (one of the perks of being in the SGV). There’s plenty of room to park your Ferrari, should you have one.

With its opulent setting and well-executed food presentation, it’s easy to see why Michelin chose to bestow a star upon Bistro Na’s (and why it’s so popular amongst the wealthy).