For a mere $10 at Kato, you can score lunch cooked by one of the best new chefs in America according to Food and Wine. At night, Kato only offers an $85 prix fixe dinner menu, but at lunch you can dine for much less. While the lunch menu has a handful of Taiwanese/Chinese dishes offered, it changes periodically with weekly specials added. I had been during a previous lunch pop-up, so when I heard they were starting lunch service I knew I had to go.

Kato occupies a tiny space in an ugly mini mall in West LA, tucked behind a dry cleaners. During lunchtime, you order at the counter, grab your utensils and select a seat. Since I was by myself, I chose one dish – the scallion oil noodles. The famed chef brought the dish to my table, beautifully presented with a sprinkling of micro greens circling the fried egg. 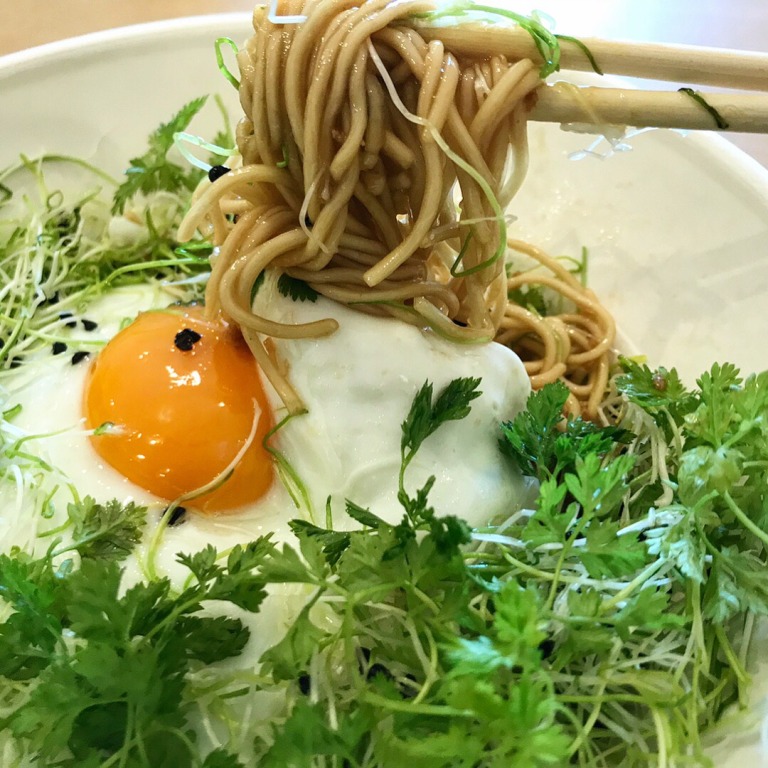 Wow. That was the word that came to mind. They were unlike any scallion noodles I’ve ever had. The optional egg made the dish, especially when the yolk broke, covering the noodles in eggy goodness. I scarfed them down, leaving not a trace. For $7 (plus an extra $1 for the egg), it was more than worth it.

Excited by my visit, I returned the next week with my family. This time we tried the fish cutlet, a large piece which had been lightly battered and fried. It was served on top of rice with some pickled cucumbers and drizzled with sauce. Likewise, the fish was a winner, not greasy, with just enough sauce to add some flavor.

The scallion noodles were eagerly devoured by my very picky daughter, leaving my husband and I without anything beyond a first bite. The only disappointment was the tomato egg rice. It was a pretty basic dish, scrambled eggs on top of rice with some bits of tomato strewn on top. Even with the addition of bacon, it didn’t live up to the other dishes and reminded me of something I could have made myself.

When Kato changed their lunch menu, I returned for their famed beef noodle soup. It looked terrifyingly spicy, but to my relief, it only had the slightest bit of heat. However, there was no beef whatsoever in the dish making me wonder, “If there’s no beef, can it be beef noodle soup?”

I thought it might be a fluke, but when I came back for lunch on another day, someone else had ordered it and asked about the beef. “We’re doing it with egg today,” he was told. “Did you run out of beef?” he pressed, somewhat in disbelief that a beef noodle soup could have no beef. He was told they were not, but that it was conscious decision to serve the soup without it and replace the meat with an egg. He ordered another dish, which he got comped – it pays to be a squeaky wheel.

The Lu Rou Fan, Taiwanese braised ground pork, was pretty basic, served on top of rice with a circling of micro greens. This was more like having a home-cooked meal – except for those micro greens, which made me wish that the dish had some other vegetable addition.

The stand out dish was the chicken sandwich. I had eaten the full-size chicken sandwich during a previous lunch pop up and fell head over heels in love with it. This iteration was a smaller version, served on a bao bun, with a bit of spicy mayo, slaw and Thai basil. The chicken was as spectacular as I remembered, leaving me to think that maybe the next time I should just order a bunch of chicken sandwiches and not bother eating anything else (unless those scallion noodles are back).

If you’re having trouble deciding, ask Nikki, the friendly woman behind the counter who will steer you to the stronger dishes, sparing you from disappointment. By the way, Jon Yao, it’s okay to smile. You’ve been named one of the best new chefs in America.