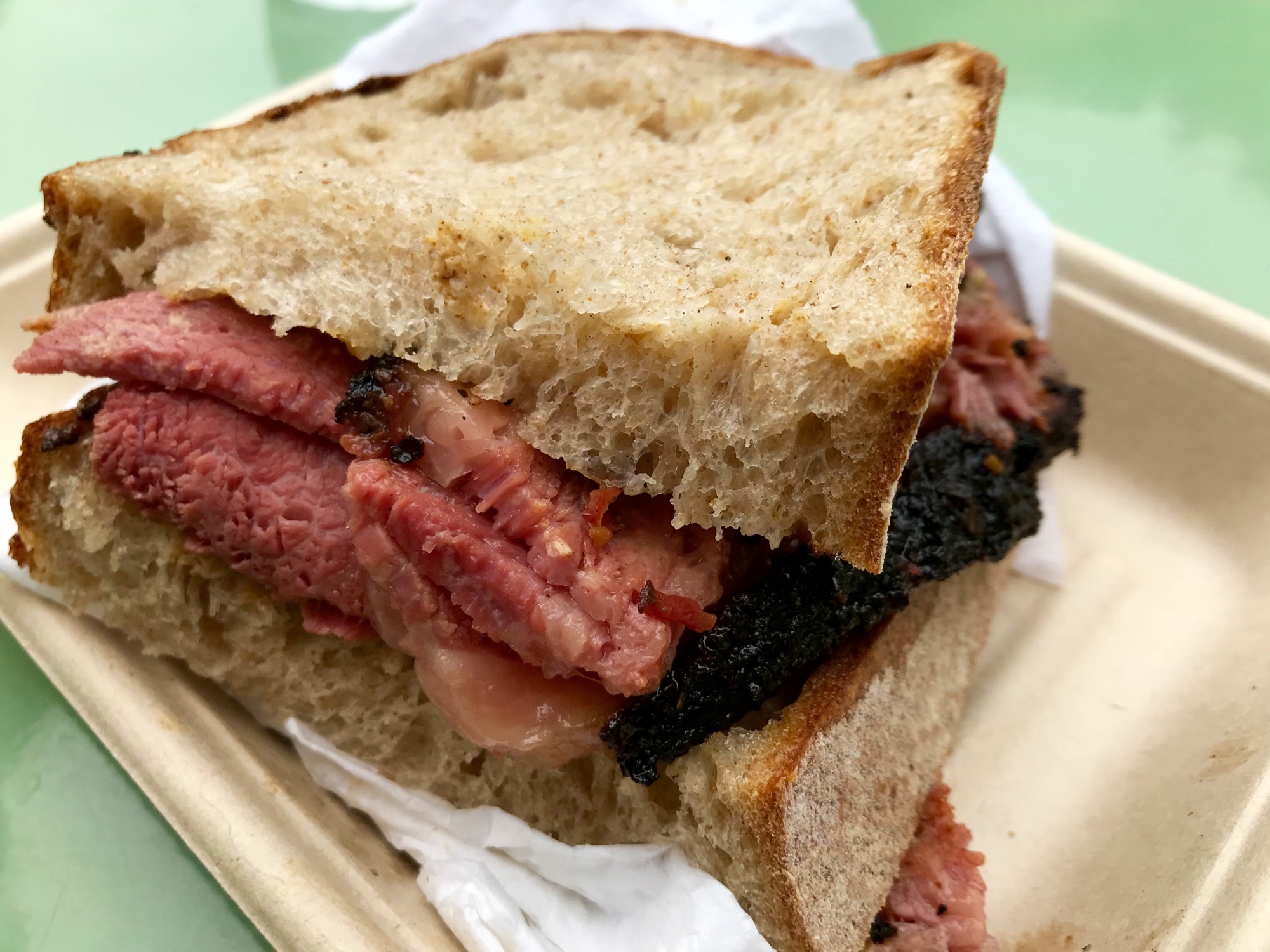 Smorgasburg LA is like a Disneyland for foodies. There’s long lines, it’s crowded and it’s totally overwhelming. Like a visit to the Happiest Place on Earth, you’ll have spent the day walking around outside, and in the process, dropped a lot cash (or at least given your credit card a workout). 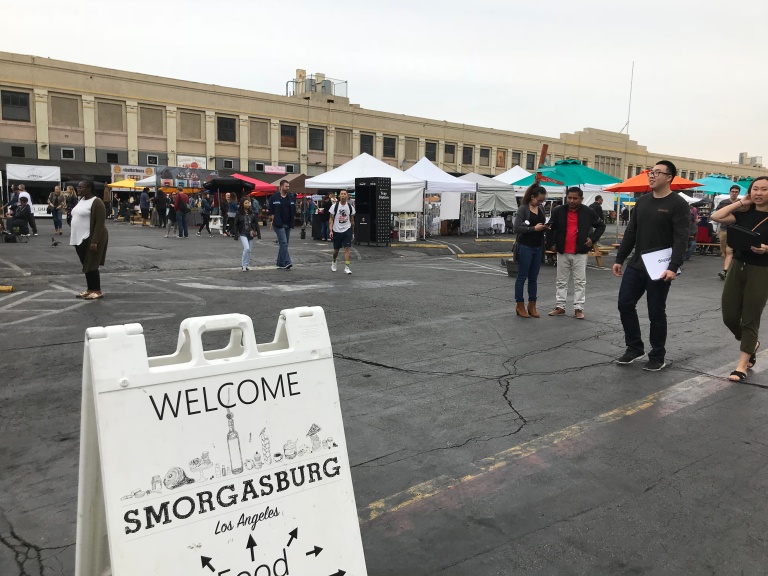 Smorgasburg originated in Brooklyn as an open air food market in 2011, and then since expanded, bringing a Los Angeles version in Downtown LA in 2016. Every Sunday from 10am to 4pm, Smorgasburg sets up shop in the five acre Alameda Produce Market, with a rotating number of about 50-60 food vendors and various non-food purveyors. 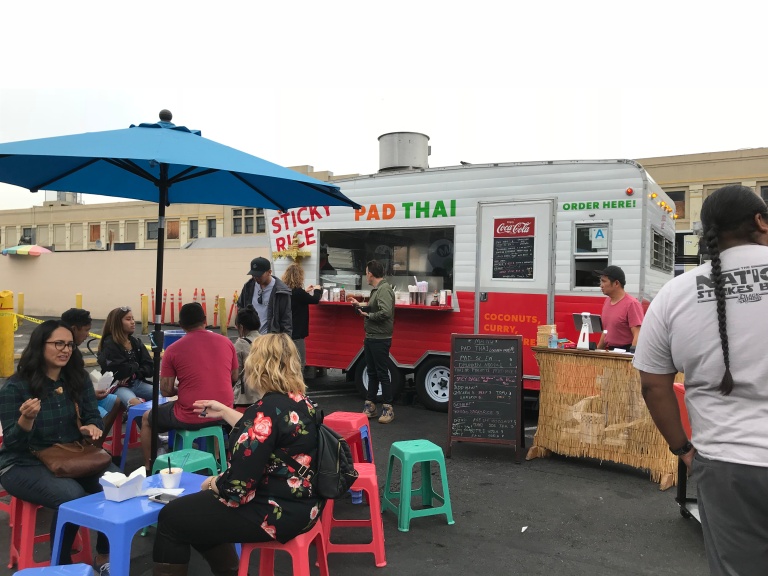 There are a few food trucks, The Nomad Truck and Butterfish being here on my visit, but the vast majority are food stalls. Food ranges in cuisines, mostly concentrated in Asian (Taiwanese, Chinese, Japanese, Vietnamese)  and Latin American (Mexican, Peruvian, Colombian), with some BBQ, dessert and vegan joints thrown in for good measure. 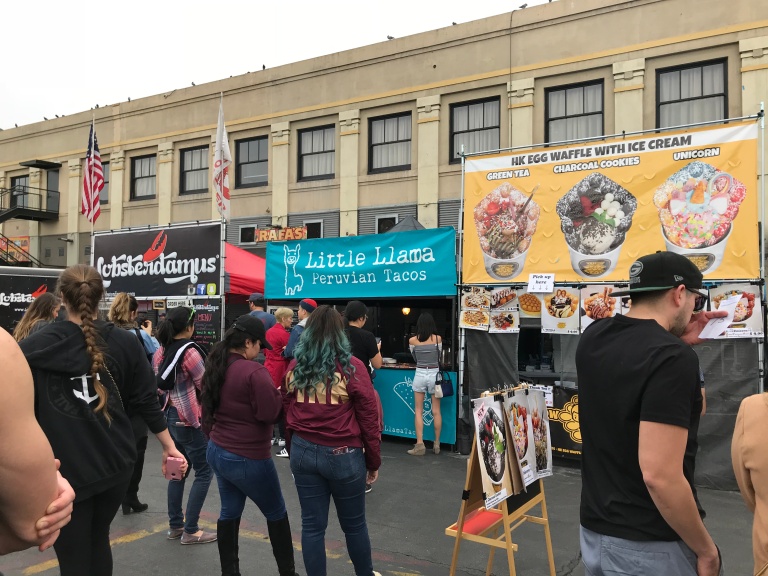 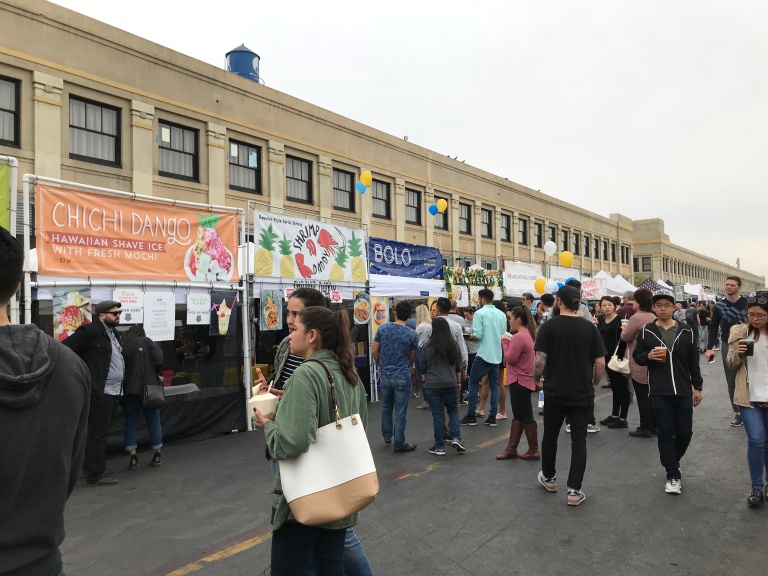 Like Disneyland, the best offerings will probably have the longest lines. 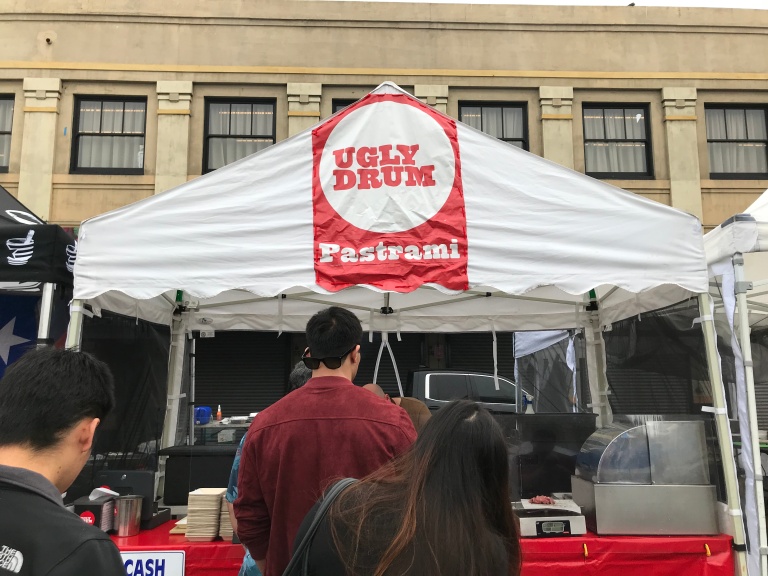 I was curious about Ugly Drum, rumored to be the best pastrami in Los Angeles. The meat is brined for two weeks, rubbed with various spices and then cooked in the smoker at Bludso’s BBQ on La Brea. 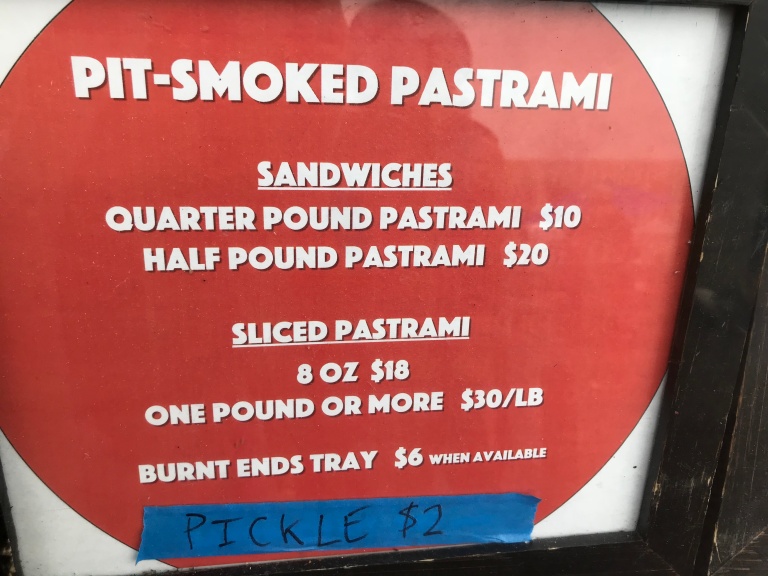 For a food stall, Ugly Drum is pretty pricey, with a half-sandwich clocking in at $10. That’s a quarter pound of pastrami and bread, with some wholegrain mustard if you like – no coleslaw, no Russian dressing, no cheese and no sides. For $2, you can add a gigantic pickle. 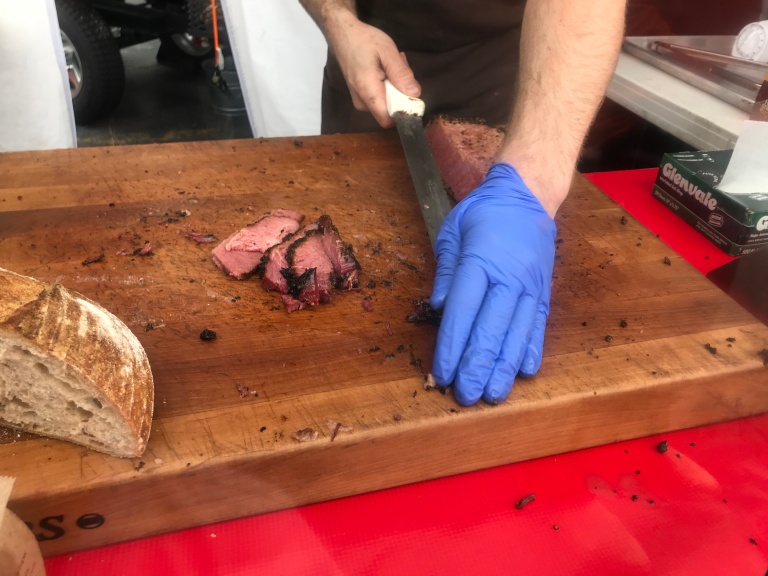 Erik Black, one of the co-owners, was single handedly manning the booth, cutting the meat and bread for each order. 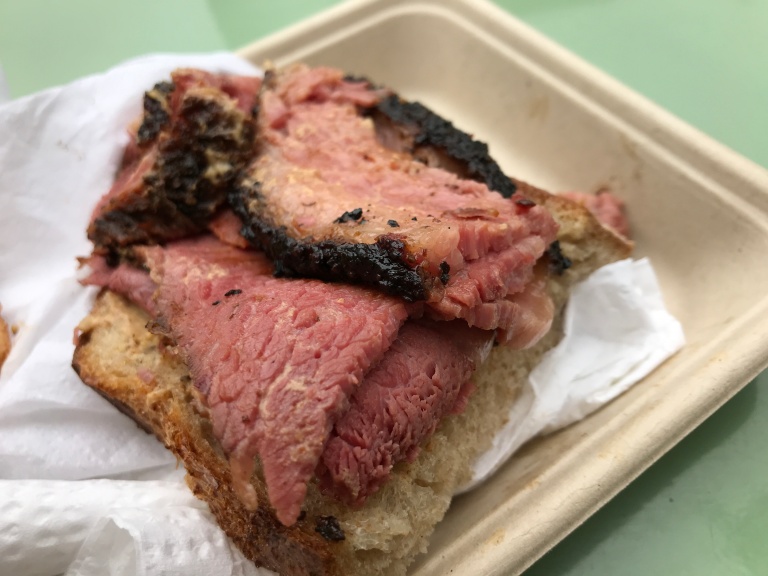 It was delicious. You could taste the love that went into creating the sandwich. The meat was pretty fatty, making the pastrami just melt in your mouth – well-worth the clogging of my arteries. Yeah, I had been a Langer’s fan, but Ugly Drum made me switch teams. Although to be fair, that crusty twice-baked rye bread at Langer’s kicks the wheat bread at Ugly Drum to the curb. If you could take the Ugly Drum’s pastrami and Langer’s rye bread, you would have perfection. 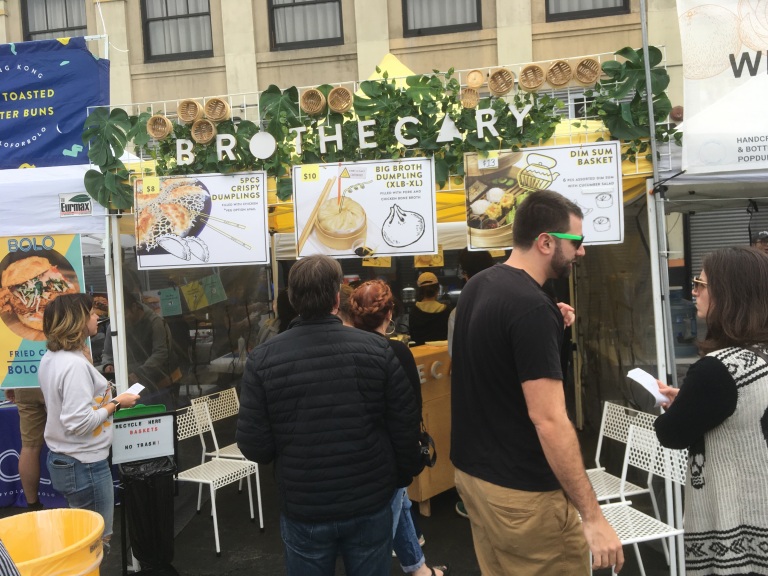 Brothecary, a dumplings food stall, is probably best enjoyed by those who don’t frequent the San Gabriel Valley for Chinese food. By comparison, the dumplings here are downright expensive, with a 6 piece dim sum basket at $13. The dim sum were super tiny too. The big attraction was the gigantic big broth dumpling that came with a straw so you could drink the broth. 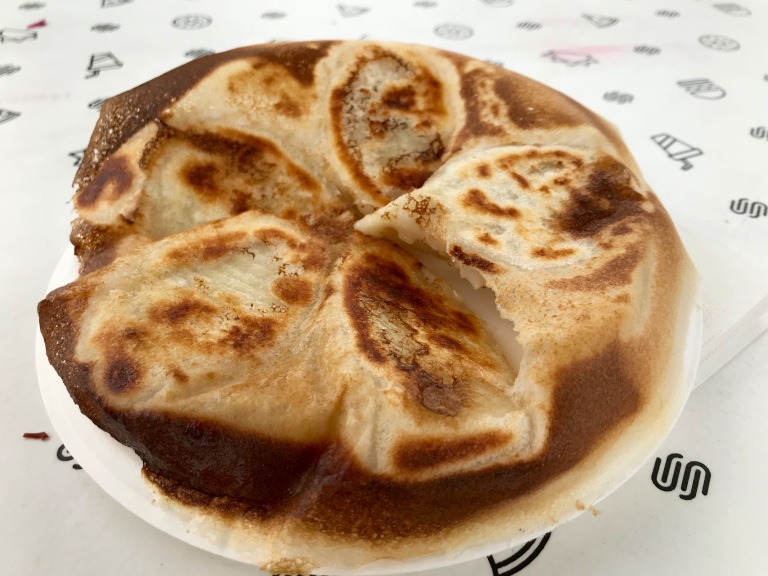 My daughter’s five piece crispy dumplings, had a nice crispy crust at the bottom, uniting the dumplings. It’s a pretty nifty visual if you haven’t seen it before. 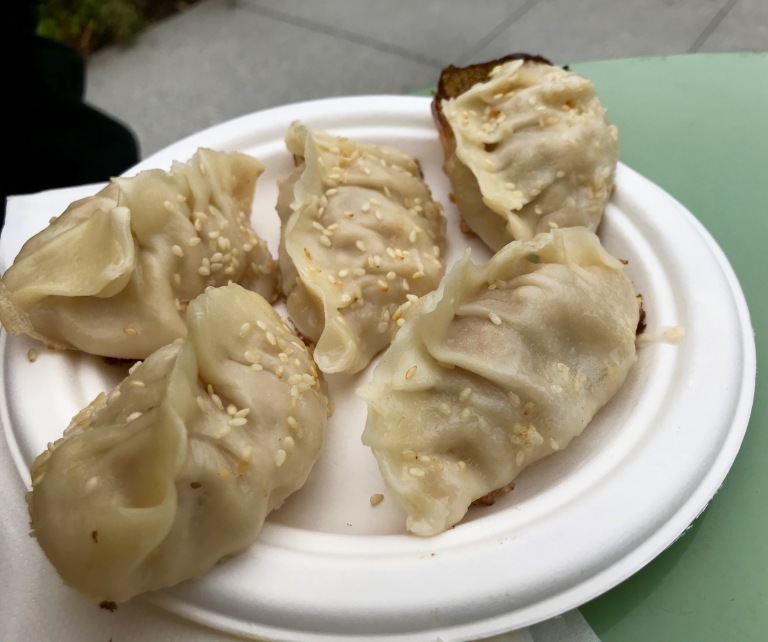 The dumplings were fine, though $$$ at $8. Even my daughter, who doesn’t normally pay attention to cost, was appalled. If you’re looking for dim sum, you’re better off dining in the San Gabriel Valley. 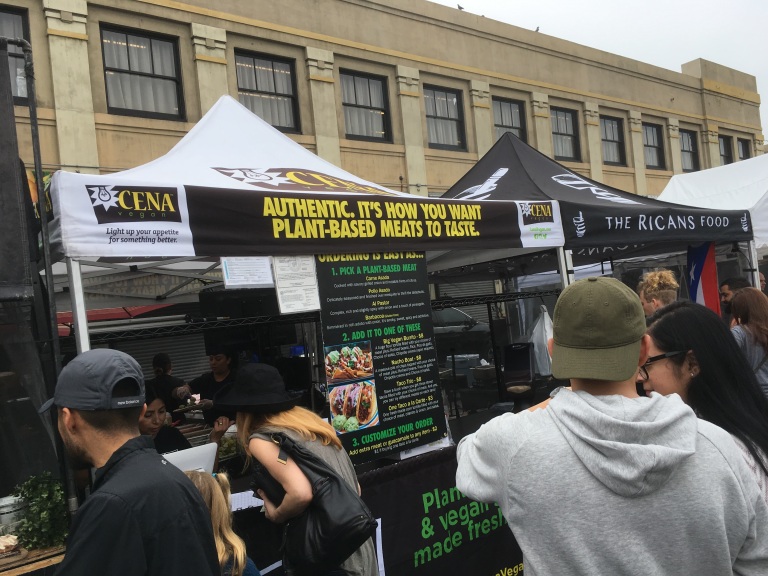 The other E-ticket ride of the day was Cena Vegan. This stall featured four plant-based “meats” – carne asada, pollo asado, al pastor and barbecue – made from a mixture of high protein wheat, soy and garbanzo flours, which could be used in burritos, nachos and tacos. 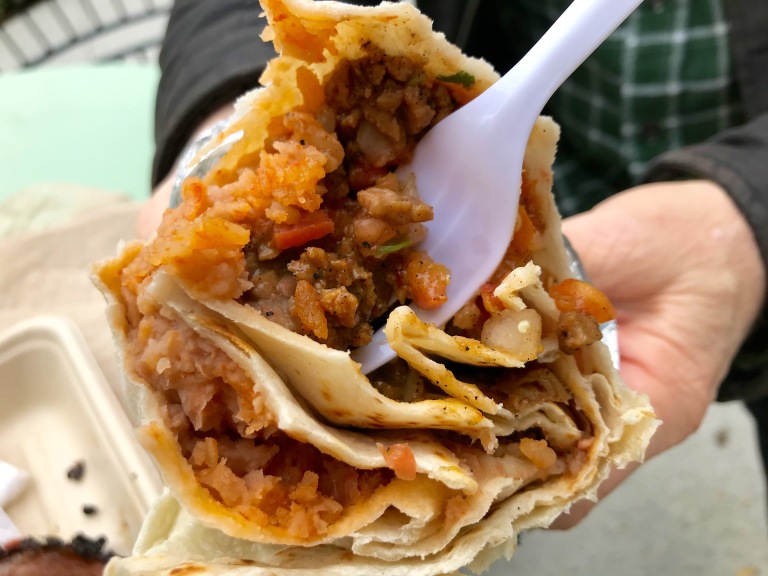 I have to admit that if I didn’t already know it was vegan, I would have thought the al pastor burrito was filled with real meat. The al pastor, cooked with onions and pineapple, was spicy, with just a touch of sweetness. At $8 for a gigantic burrito, it was the best bargain of our day.

Like a kid at Disneyland, I didn’t want to leave and could have stayed much longer. Alas we had to go (all good things must come to an end), retreating to our car (parked in their parking structure which has free parking for 2 hours – beat that, Disneyland). Like a kid leaving the Happiest Place on Earth, I smiled to myself, thinking about the day’s adventures, already looking forward to my next trip.