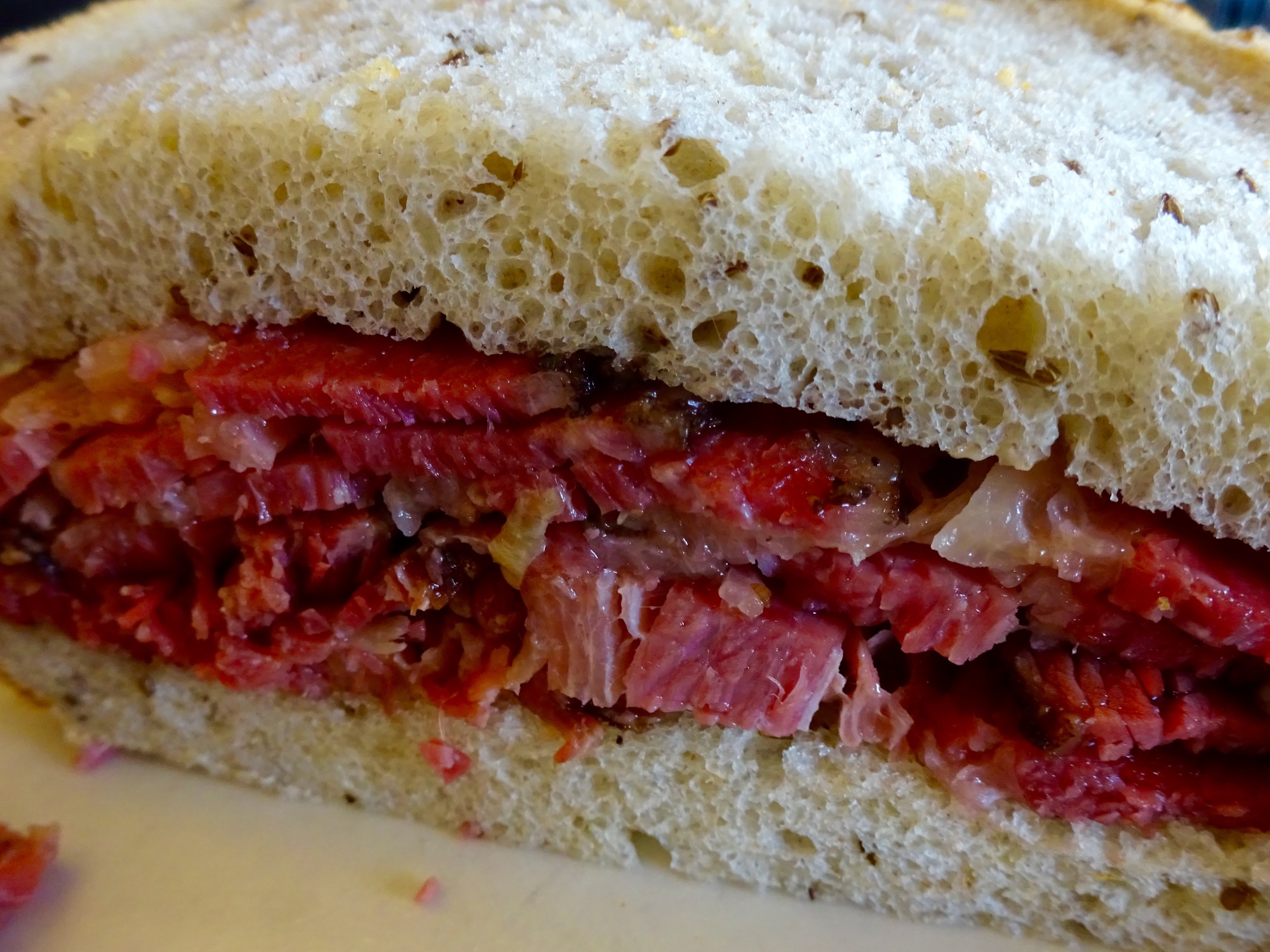 The best pastrami in Los Angeles, and possibly in the entire US (though Katz’s fans may disagree), can be found at Langer’s Deli. Growing up, I knew of Langer’s famous pastrami but had never been there, its neighborhood being too edgy for my suburban family to visit. Apparently we weren’t the only ones put off, as Langer’s came close to closing in the early 90’s. Luckily, thanks to the Metro stop opening nearby, they enjoyed a resurgence and are fast approaching their 70th anniversary.

My brother, visiting from the Bay Area, wanted to have his birthday lunch there, enticed by my tales of their incomparable pastrami. My mother was quite nervous when we arrived in the neighborhood but saw the line outside and knew that there must be a reason why I dragged them there. Fate smiled upon us as we had a big group and were able to circumvent the line.

Langer’s has an extensive menu – if you’re indecisive, you’ll be in trouble. Since the sandwiches don’t come with any sides, our waiter suggested fries for the table. The crinkle-cut fries had my mom oohing and aahing since she never eats fries. Me, it was my third day straight of having fries at lunch so I can say they were nothing too special.

If you have kids and they, heaven forbid, don’t want to eat pastrami, there’s a kid’s menu featuring such classics as hot dogs and spaghetti. The hot dog is extremely long and a bit challenging for any kid to finish.

If you, heaven forbid, have someone who is gluten-free and dairy free, they’ve got options like a Chef’s Salad, with a small mountain of turkey and ham mounded on top.

Or, if heaven forbid, you have a vegetarian in tow, a veggie omelette could satisfy their hunger. This one had mushrooms, with Swiss cheese and avocado on top, side of hash browns and toast.

Langer’s claim to fame is the No. 19 – pastrami, coleslaw, Russian dressing and Swiss on rye, which my brother completely scarfed down.

The pastrami is smoked and then steamed prior to serving, the steaming rendering the meat into a soft melt-in-your-mouth texture. The meat is slightly fatty, just enough to give it flavor.

Personally, I like prefer my pastrami sandwich, plain – just meat, mustard and bread. My favorite part is the pillowy soft rye bread enfolding the meat. The secret to the unique texture is that Langer’s double bakes the bread, resulting in a shatteringly crispy crust that contrasts with the impossibly soft center.

My mother, who also likes her pastrami sandwich plain, ordered a side of coleslaw, which I thought was a bit superfluous. That said, the coleslaw was crisp, barely dressed, offering a refreshing change from the density of the protein.

Langer’s has a parking lot a block away, which is usually full. If you don’t want to struggle with parking, there’s curbside pickup service, which they claim to have pioneered so you can make a quick retreat. Either way, it’s a good reminder that one needs to venture out of the confines of their usual neighborhoods to discover one of LA’s greatest treasures. Langer’s even won my mother’s approval as she declared it the best pastrami sandwich she’s ever eaten. I have to agree.