Standing across the street, you could smell the intoxicating scent of cinnamon coming from the Old West Cinnamon Rolls in Pismo Beach. With over 45 years in business, they’ve been luring in diners from near and far with their incomparable cinnamon rolls. 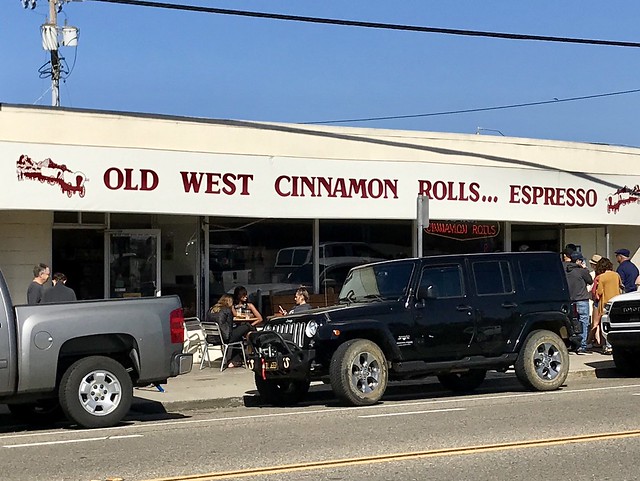 On a weekend morning, there was a line already out the door. It moved quickly though, and we found ourselves at the front of the line in no time. There are eight different varieties of rolls – from the original hot cinnamon roll to nut-topped to their newest maple bacon – ranging in price from $3-$4. 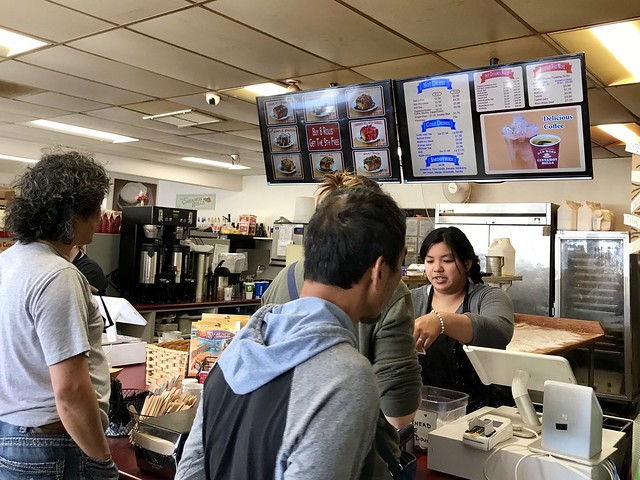 The cinnamon rolls are made fresh all-day long. You can watch their cooks at work rolling out the long pieces of dough, brushing it with butter and sprinkling it with cinnamon sugar, before rolling it up. 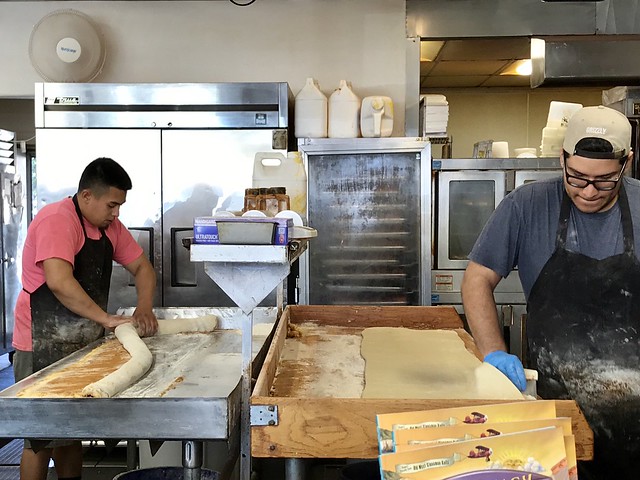 If you dine in, you can find a table, which will probably be stained with evidence of previous rolls, and wait until your order is ready. 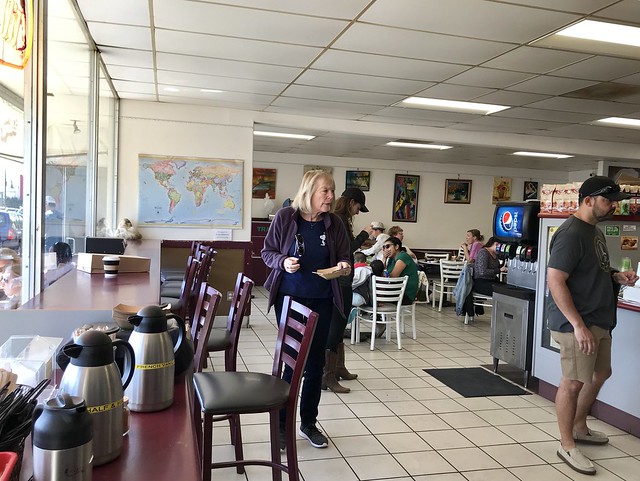 The original cinnamon hot cinnamon roll had a golden hue, with darker patches of cinnamon sugar – but that wasn’t what we were here for. 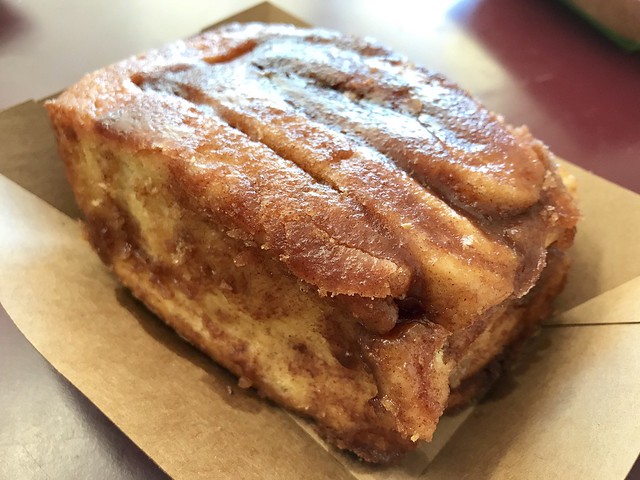 The cinnamon roll with cream cheese frosting proved to be irresistible – especially with that frosting cascading down that warm roll. 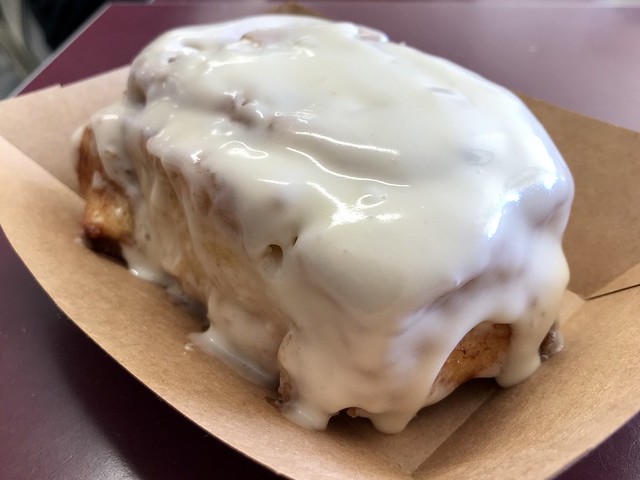 It was the perfect combination of pillowy soft dough, cinnamon sugar and frosting. 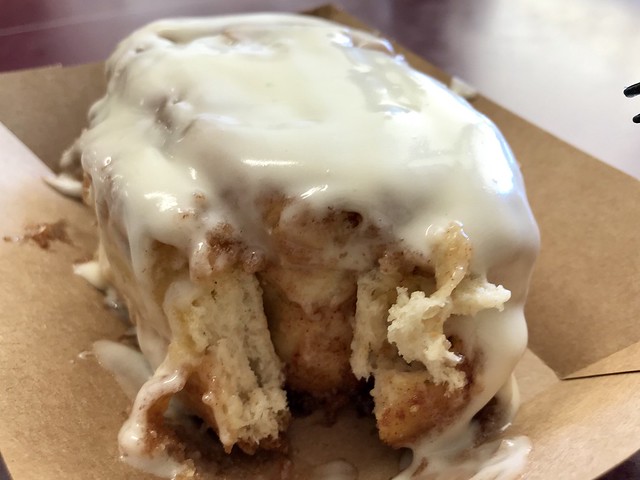 My husband and I split a roll, not wanting to overdo it. 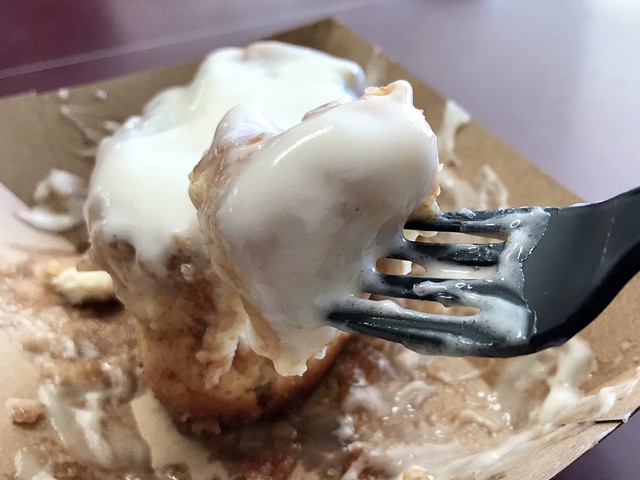 It was gone in no time. By the way, props to Old West for using compostable utensils and eco-friendly packaging. 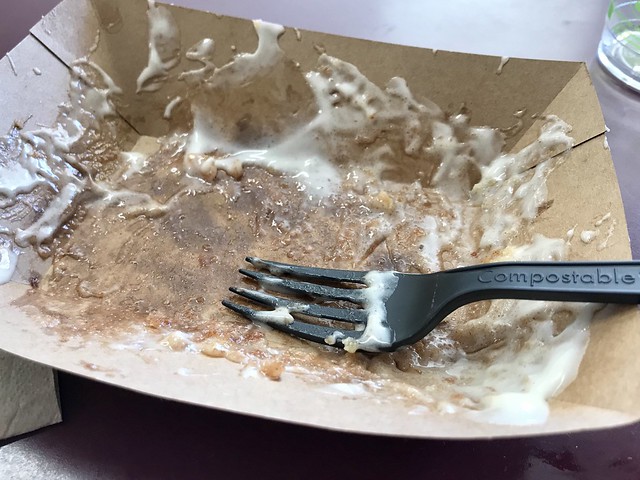 The sheer decadence of eating one of their cinnamon rolls is not to be underestimated. I could have eaten an entire roll myself, but would have felt guilty for days. Sharing one, my only regret was not having more of it to eat – damned if you do, damned if you don’t. Old West Cinnamon Rolls are cheaper than the ones at Cinnabon and much better tasting. I wish there was an Old West Cinnamon Rolls in my local mall. On second thought though, maybe it’s better there isn’t maybe it’s better there isn’t or I’d probably look like a nice round roll. At least I would smell delicious.