It’s been twenty years since my husband gave up eating red meat. Ironically it was about this time that he was given a gift certificate to Johnnie’s Pastrami as a birthday present. Since he was no longer eating pastrami, the gift certificate was shoved into a drawer and then subsequently lost until recently. It took two moves and some cleaning to unearth this unused present. Would they still accept it? After a quick check of the menu to make sure that there would be something for him and my daughter to eat, we drove over to Johnnie’s to find out.

Located on a busy corner of Sepulveda Blvd. and Washington Blvd., Johnnie Pastrami has been there for over 60 years. The interior looks like it probably hasn’t changed much either, with its u-shaped counter flanking the kitchen. One of most charming things about Johnnie’s are the jukeboxes located in every booth.

I spent way too much time flipping through the song selections trying to determine what songs to pick and never wound up selecting any songs to play. The songs run the gamut from 50’s era to the 90’s (which is around the time we stopped coming here).

In deli fashion, they plop down a container of pickles as soon as you sit down. From what I remember, the pickles here are pretty good, though I didn’t get to eat any on this visit. My daughter mowed through all the pickles, leaving none for her parents.

My little princess ordered a hot dog from the kid’s menu, which also included a soft drink, fries and ice cream.

My pesco-vegetarian husband selected the fish sandwich, which was pretty big.

I, of course, ordered half a pastrami sandwich. The pastrami is nowhere near as good as Langer’s, more in line with pastrami from The Hat (though I prefer The Hat). I smeared mine with spicy mustard. Even with my enormous appetite, half a sandwich managed to satisfy me.

Their crinkle cut fries are an extra charge. I couldn’t bring myself to order fries in addition to eating pastrami, as I would feel too guilt-ridden.  Luckily my daughter doesn’t like fries (gasp!) so I was able to eat her fries. I always like to use the logic that if I’m eating someone else’s fries, it doesn’t really count as my having eaten fries (maybe it also accounts for why I was full after eating only half a sandwich).

Johnnie’s has other items on the menu like burgers, steak sandwiches, tacos, tamales and fried shrimp. I’ve never tried anything other than the pastrami, fries and pickles so I can’t comment on any of these items – except for, why would anyone order anything other than pastrami at a place called Johnnie’s Pastrami?

For dessert, Johnnie’s has pies and ice cream. My daughter’s meal came with ice cream, which came with a lollipop bizarrely placed in the middle of it. 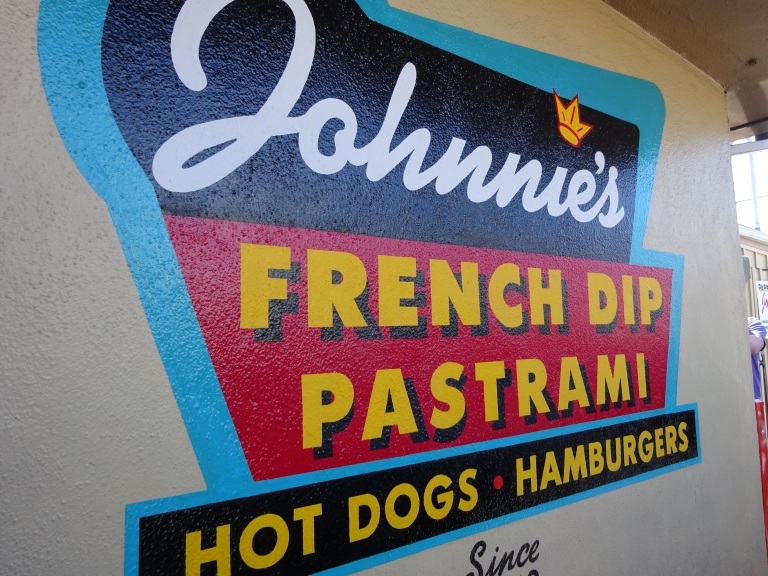 If you want to travel back to the 50’s but don’t have a DeLorean with a working flex capacitor, head over to Johnnie’s. Oh, and they did accept that gift certificate. The waitress joked, “You should buy another one and come back in 20 years.” They don’t take credit cards, so if you do go to Johnnie’s bring cash (or a gift certificate).