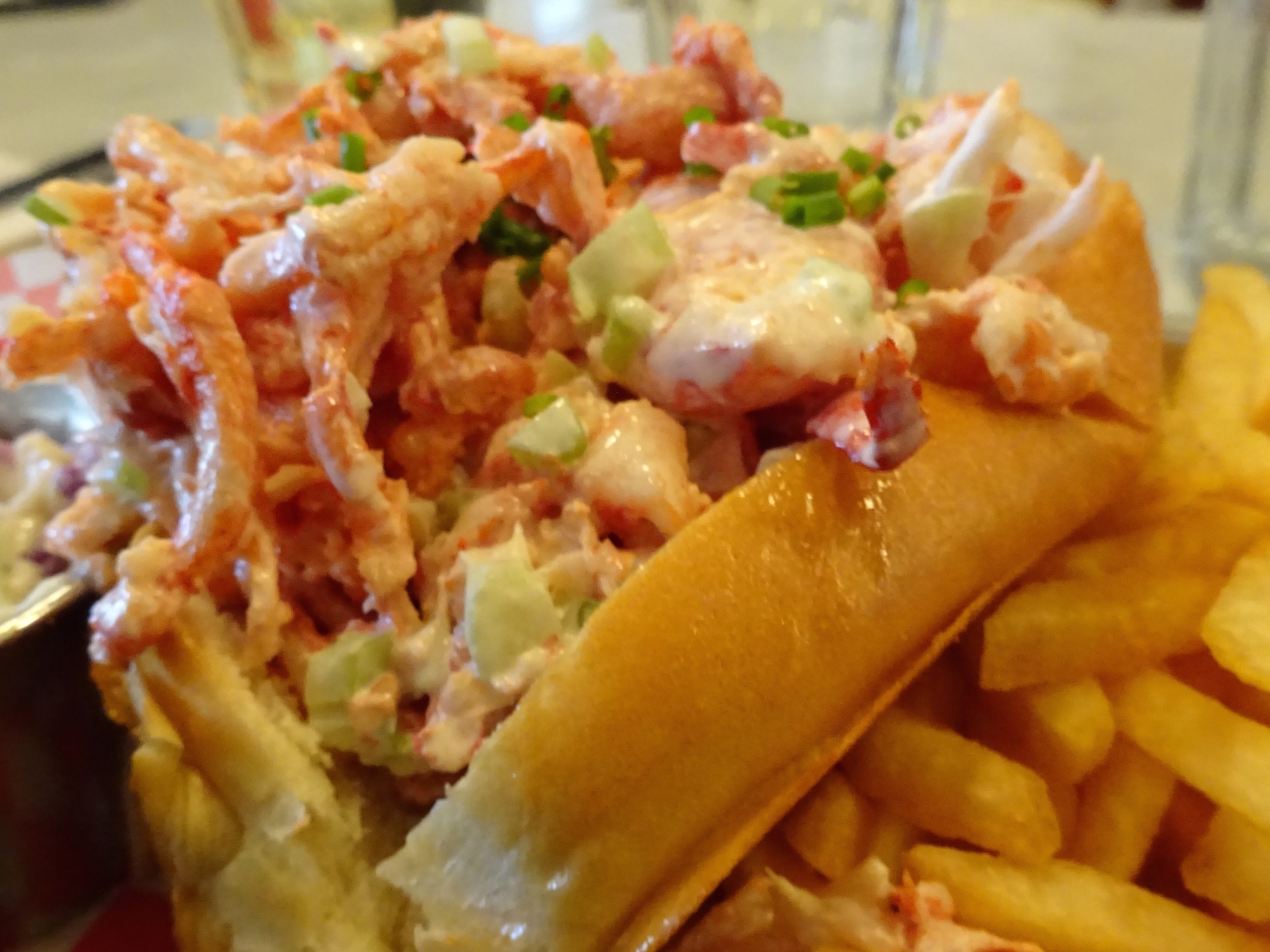 On New Year’s Eve, my dad and I set off for Swan Oyster Depot for lunch. When we arrived, we were delighted to see that the line wasn’t that long. No sooner had we gotten in line, the woman in the group in front of us said that they were the last customers in line because the restaurant was closing early. A quick check inside confirmed that this was true. Fortunately, my dad remembered that Woodhouse Fish Co. was nearby, so we hopped on a bus to Fillmore.

Luckily, we were able to be seated immediately. I had previously had my heart set on clam chowder, my dad’s on raw oysters. Woodhouse Fish Co. had both, which made us very happy campers. My clam chowder was perfect, not too thick, with more clams than filler potatoes.

Likewise, my dad enjoyed his oysters. He observed that it was probably in our favor that we ate at Woodhouse Fish Co. instead, because Swan Oyster probably would have run out of items by the time we were seated, as they would be closed for several days.

Having never tried a clam roll, I was curious enough to order one. I was expecting fried rubbery strips of clam but was pleasantly surprised to find that it was more like a oyster po’ boy.  I also have a weird obsession with lobster rolls (mainly because they are few and far between in Los Angeles) so we ordered the larger size and split it. Both rolls were served with coleslaw and fries.

All in all, it was a satisfying lunch. The restaurant was packed by the time we left, with people waiting for tables. Quite possibly some of them might have arrived, after finding Swan Oyster Depot closed. So, when life gives you lemons, go to Woodhouse Fish Co.

Vegan Crunch Wrap @californiachickencafe - avocado, veggie rice, tomato, greens, crispy noodles and veganaise in a pita wrap. Love the crunch from the noodles in every bite! California Chicken Cafe is open for takeout and delivery. Their chicken is always delicious and so are their sides! They’re also famed for their Chinese Chicken Salad, which also has those crunchy noodles and Chinese dressing. . . . . . #californiachickencafe #meatlessmonday #vegan #vegetarian #food #foodpics #foodie #lafood #lafoodie #laeats #foodstagram #instafood #eaterla #yelpla #infatuationla #dinela
Unable to make our monthly SGV trip, got our Chinese food fix @tastynoodlehouse on Sawtelle with spicy fish and tofu and noodles with fish and preserved veggies. They’re open for takeout and delivery through DoorDash. I thought it was a pain in the you-know-what to remove everything from the takeout containers, but it sure looks better for pics! . . . . . #tastynoodlehouse #noodles #sawtelle #food #foodpics #foodstagram #instafood #foodie #lafoodie #lafood #laeats #yelpla #dinela #eaterla #infatuationla
Just saw that @lodgebreadco baked 50 loaves of challah for Shabbat, only available for pickup at their Culver City store. Their challah has a slightly salty crust which blends nicely with the sweet interior. (This pic taken months ago...the good ol’ days.) Lodge is also taking online bread and pastry orders 48 hours in advance, in addition to having items available to go. If you’re motivated and looking for a project, you can even buy flour and eggs there and make your own challah at home! . . . . . #lodgebread #challah #culvercity #food #foodpics #foodblogger #foodstagram #instafood #foodie #lafoodie #laeats #lafood #yelpla #dinela #infatuationla #eaterla
Pasta from local fave @pitfirepizza in Westwood - Roasted Chicken and Mushroom Cavatappi, Spaghetti Marinara and Linguini Bolognese. Yeah, it’s strange that we all ordered pasta, but who knew how hard pasta would be to buy at the market? (They at least always have some kind of frozen pizza in stock.) Pitfire Pizza is available for takeout or delivery. They just introduced some new takeaway/delivery options, including a $20 sangria pitcher that was totally tempting. Perhaps, next time. . . . . . #pitfirepizza #westwood #food #pasta #foodporn #foodpics #foodstagram #instafood #foodie #lafoodie #laeats #lafood #yelpla #dinela #infatuationla #eaterla
The Southwest Tuna @blacksheepburgers on Sawtelle - the best tuna sando around - spicy tuna, avocado, tomato and alfalfa sprouts on Extea Bakery’s multigrain. Their food is made with lots of love, and the staff are super friendly! I always mean to branch out and try a beef burger or the chicken katsu sando, but I always get their Cali Chicken Burger. Next time! Open for takeout/delivery. Give them a call or hit them up on one of the usual delivery services. . . . . #sandwich #sawtelle #food #foodie #lafoodie #lafood #foodpics #laeats #foodstagram #instafood #dinela #eaterla #yelpla #infatuationla #thegreatamericantakeout #greatamericantakeout
A bowl of noodles is total comfort food to me. On weekends, we ramen - today’s from @ramenya_asianya which is open for takeout/delivery. I replated (or should I say rebowled). The nice part is that I still have leftover broth that I can use for future bowls of noods! Ramenya has been around since 1990. You can choose soy, salt or miso broth, which makes it much lighter than the tonkotsu that’s all the rage now. Here’s to hoping they’re open for at least another 30 years! . . . . . #ramen #noodles #noodleporn #food #foodporn #foodpics #foodie #lafoodie #laeats #lafood #foodstagram #instafood #dinela #yelpla #infatuationla #eaterla