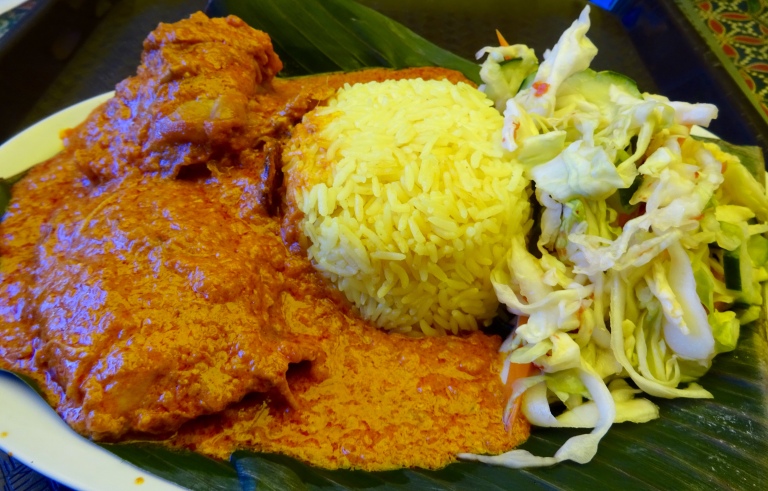 Before The Grove, the Farmer’s Market on Third and Fairfax was a sleepy enclave of food stalls, whose primary customers were the white-haired neighbors and hapless tourists who had been left to wander as part of their tour bus stop. Singapore’s Banana Leaf is a holdover from those days, serving Singapore/Malaysian/Indonesian food, a rare combo in the LA dining scene.

Huell Howser even paid Singapore’s Banana Leaf a visit on his show. If that’s not good enough for a stamp of approval, I don’t know what is!

When we go to The Grove, Singapore’s Banana Leaf is the place we go to eat. Because my daughter doesn’t like Mexican food, we’ve since given up Loteria (which is damn good and has really long lines on the weekend). It’s counter service so you order at the counter, pay and then get a number and find a table. On the weekends, finding a table is a bit of a challenge so someone might have to be stationed by the counter to wait for the order to be called while the other person seeks a table.

My daughter always gets the same thing – vegetarian mee goreng (very mild), an Indonesian noodle dish with bean sprouts, egg, onions and the odd potato here and there (which I love), topped with scallions. 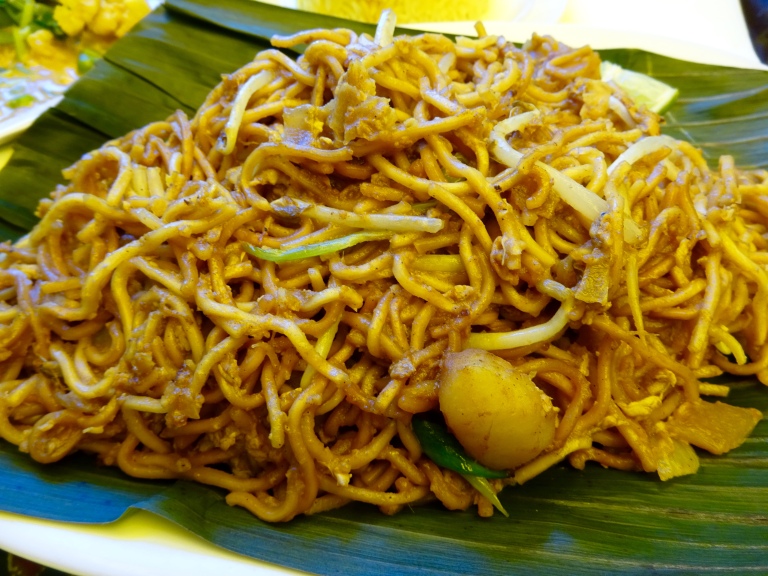 My husband will either get a vegetable curry or in the pic below, a fish curry. 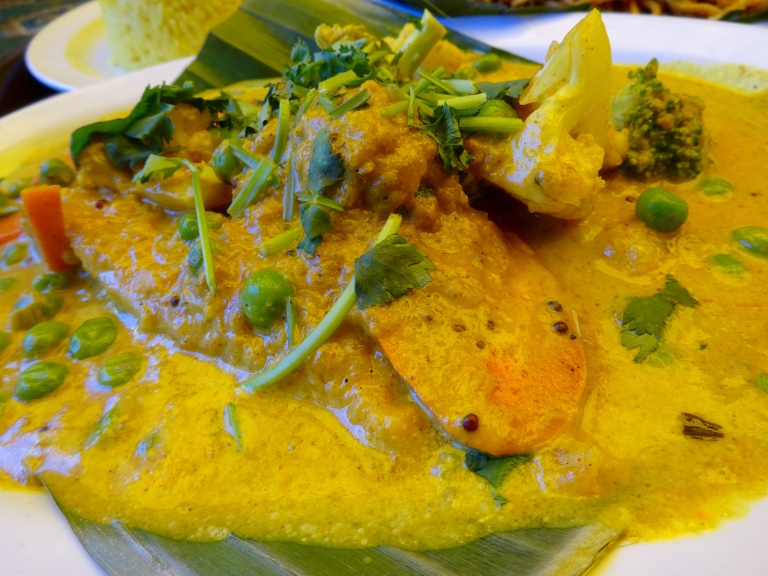 The portions are not very big. Truth be told, I’m always a little hungry after eating here…which means I have room for dessert!

The desserts on offer here are very unusual. There are two – the Chendol and the Ice Kachang. In all the years I’ve come here, I’ve only seen dessert ordered once – that would be the Ice Kachang. I kick myself for not having taken a picture of it. It looks like someone threw a snow cone on top of of some red beans, fruit cocktail and some other mystery items. It was one of the weirdest desserts that I’ve ever seen.

I kept looking over to see the people’s reaction. After sneaking several peeks to see if they tried it, my food came. I was totally engrossed in eating that when I looked up, the people were gone but about two-thirds their Ice Kachang was still there. I have no idea if they liked it or not. Perhaps, looking at the amount leftover, not.

So if you’re at The Grove or The Farmer’s Market and in the mood for something a little different, you may want to try Singapore’s Banana Leaf. For those with an adventurous streak, there’s the Ice Kachang to complete your meal. Otherwise, there’s Bob’s Doughnuts and Bennett’s Ice Cream in the Farmers Market or Sprinkles in the Grove to satisfy your sweet tooth.